Come on Sheriff, can't you see that your deputies were only trying to help you out. So what if it took a few beers for them to get creative? After all, they did come up with a surefire recruitment poster.

MIDLAND, Texas — A Midland County sheriff's deputy was fired after police say he and four other deputies asked a waitress to take a picture with one of their service rifles while they were visiting a restaurant in Round Rock last week, Midland Sheriff Gary Painter said.

The deputies will not face criminal charges, according to Melissa Hightower, an investigator with the Williamson County attorney's office.

On Aug. 10, Round Rock police were called to the Twin Peaks restaurant — where waitresses typically wear halter tops and short shorts — at 100 E. Louis Henna Blvd. after an off-duty Manor police officer reported seeing a waitress holding what appeared to be a rifle in the parking lot, according to a police report. The deputies were taking photos as she held it, the report said. 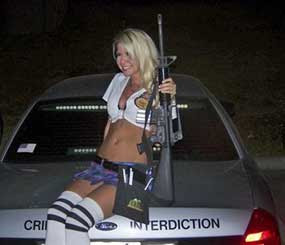 The pose that got a cop fired

The report says the waitress told police that the deputies asked her to come outside and pose with the weapon, according to the report.

The deputies were in Round Rock for training, Painter said.

Eric Poteet, a spokesman for Round Rock police, said they did not charge the deputies because no crime was committed. Dee Hobbs, chief of the criminal division of the Williamson County attorney's office, had said the officers could face charges of disorderly conduct, a Class B misdemeanor punishable by up to 180 days in jail.

Painter said it would have been a "knee-jerk reaction" to fire all of the deputies involved. Instead, he interviewed each deputy separately and doled out reprimands based on the deputies' participation in the incident. Subia, who was fired, was "the one who handed the weapon to the lady," Painter said.
Posted by BarkGrowlBite at 11:58 AM