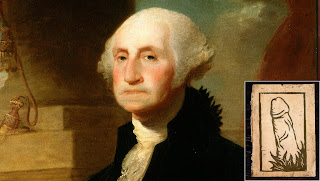 PHILADELPHIA—Saying the discovery shed new light on the father of our country, a team of University of Pennsylvania archivists announced Monday that new evidence suggests George Washington sent a woodcut of his penis to his secretary. “

After uncovering a well-preserved, remarkably graphic woodcut dating from the American revolutionary period, and establishing the provenance of both the woodcut and the image from such contemporaneous descriptions as exist, we believe we have conclusive proof that this image is indeed of President Washington’s erect penis and was in fact sent to Tobiana Lear, Washington’s personal secretary,” lead researcher Joyce Carrick said of the block print, which was discovered in the National Archives late last year tucked into a secretary’s desk drawer along with a note outlining her presence in the first president’s lewd sexual fantasies.

“We suspect this was not the only woodcut, as many other printing blocks depicting what we now know to be Washington’s penis carved at different angles and shadings have also been found. It even appears that after the original woodcut was not met with a response, several oil portraits of his genitals were couriered to the secretary’s home.”

Carrick’s team also discovered the official complaint that Tobiana Lear submitted to Congress concerning the suggestive woodcut, as well as the corresponding Presidential order immediately terminating Lear from her position and deporting her to England.

EDITOR’S NOTE: I just came across this old piece from The Onion and thought you, my readers, would find it amusing. Make George relinquish his “Father of Our Country” title, or impeach him!

And then there is that phallic Washington Monument, the world’s largest dick. Instead of tearing it down, just rename it the Obama Prick.

Posted by BarkGrowlBite at 2:47 AM