A VERY SAD STATE OF AFFAIRS April 20th has become a de facto holiday for pot proponents, with large 'smoke out' demonstrations held in the U.S.

Conservatives don’t need to worry about Obama leading our country down the path to hell. America’s potheads are doing a far better job of it. We’re already over half way there when the police fail to take any action and stand idly by while observing ‘a bunch of stoners’ openly flaunt the laws against the possession and use of illegal drugs.

HIGH TIMES FOR AMERICAN MARIJUANA SMOKERS AS POLICE ALLOW THOUSANDS OF ‘4/20’ POT PROTESTERS TO LIGHT UP ACROSS THE COUNTRY.
By Daily Mail Foreign Service

Marijuana smokers across the America lit up in public parks, outside statehouses and in the posh confines of a Hummer parked outside a pot gardening superstore to observe the movement's annual 'high holiday' yesterday.

Those who weren't within whiffing distance of a college campus or a reggae concert may not have realised that Tuesday was '4/20', the celebration-cum-mass civil disobedience derived from '420' - insider shorthand for cannabis consumption.

Advocates from New Hampshire to California trumpeted marijuana's rising commercial and political acceptance while producing collective clouds of pungent smoke - often under the watchful eyes of law enforcement officers who for the most part let the parties proceed.

A daylong rally in Denver's Civic Centre Park drew thousands of people, as did the public smoking event that persisted at the University of Colorado in Boulder despite discouragement from college administrators. 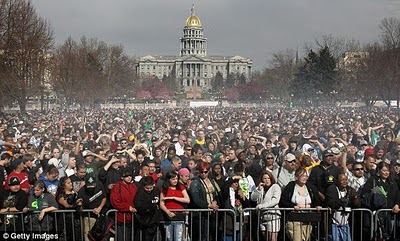 A huge marijuana 'smoke out' in front of Colorado's capitol building in Denver.

In New Hampshire, about 100 people rallied in the state capital of Concord on the eve of a Senate vote to decriminalise small amounts of pot.

Some lit up joints as state troopers watched from inside the Statehouse.

Governor John Lynch said he will veto the bill if it reaches him.

In Juneau, Alaska, about 20 young people, two dogs and a mother pushing a stroller marched in driving rain, whooping and chanting, 'Yes we cannabis!' - a play on Barack Obama's campaign slogan. Their route took them past the state Capitol and City Hall.

In California, where voters in November will consider whether to tax the sale of marijuana for recreational use, a three-month-old cultivation equipment emporium in Oakland got a 24-hour jump start, sponsoring a '420 Eve' festival on Monday.

Several hundred revelers lined up outside the 15,000sq ft iGrow 'hydroponics superstore'. Security guards kept them at bay until 4.20pm, when they could enter a medical marijuana delivery service raffle to win an giant joint and a tour of a 53ft long portable grow room with a starting price of $60,000.

'I wouldn't have thought we would be able to consume on site,' marveled John Corral, 19, of San Jose, after he obtained a wristband that gave him access to the event's two 'vapour lounges,' the one inside the Hummer and another inside a companion Range Rover limousine.

Two years ago, before he had a doctor's recommendation to smoke pot, Corral commemorated 4/20 on Hippie Hill, the Golden Gate Park promontory where an earlier generation of pot aficionados made their stand. 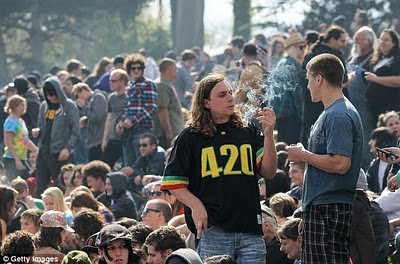 A pothead smokes at the 420 demonstration in San Francisco's Golden Gate Park.

Marijuana use - medically and recreationally - is getting more attention these days, with voters in California and possibly three other states set to decide whether to legalize adult use of the drug.

South Dakota voters will consider in the fall whether to join California and the 13 other states that allow medical cannabis use.

Most Americans still oppose legalising marijuana, but larger majorities believe pot has medical benefits and the government should allow its use for that purpose, according to an Associated Press-CNBC poll released yesterday.

Allen St. Pierre, executive director of the National Organisation for the Reform of Marijuana Laws, said the drug's steady movement from counterculture indulgence to mainstream acceptance was evident on Tuesday, when four cable television channels dedicated 'a good chunk of programming to 420'.

St. Pierre said that with the terms 'marijuana' or 'cannabis' regularly showing up on the top Internet searches, it's clear that groups like his, which has lobbied to decriminalize marijuana since 1970, are no longer blowing smoke.

'There is a large mainstreaming of all of this,' he said. 'Some of it is happening because commercial entities looking to comport with local social mores and values are taking advantage of this bizarre numerology.'

There are a variety of stories about the origin of 420, but pot advocates generally attribute the term to the time when a group of San Francisco Bay area high schoolers would gather to smoke marijuana during the early 1970s.

The term was then popularised by High Times magazine and the Grateful Dead.

At the iGrow event, Tom Patton of GrowOp Technology, proudly discussed the inspiration for the 'Big Bud' growing trailer he developed with Derek Peterson, a former stock broker.

Patton said he kept hearing about pot growers who 'were constantly putting up and taking down' grow rooms built inside warehouses or residential homes because of complaints from neighbours, fires sparked by faulty wiring or threats of law enforcement raids.

His pot room on wheels, which comes outfitted with a security system and technology to adjust temperature and humidity levels from an iPhone, may not completely eliminate the last concern, but that hasn't stopped a pair of New York bankers from investing in the invention.

'This is an enabling technology, not a hiding-out technology,' Patton said.

The lure of revenue and respectability has prompted some veterans of the marijuana wars to diversify.

Joshua Freeman, a Sonoma County pot grower, was at the 420 Eve festival handing out samples of the specialty plant food he recently developed and is trying to market.

'We are not just a bunch of stoners sitting back on a couch playing video games,' Freeman said.
Posted by BarkGrowlBite at 2:11 AM