Deutsche Dillinger sues police? He must have found an American trained lawyer. 'It is clearly a breach of his human rights and caused [the bank robber] needless humiliation and embarrassment.' Come on, give me a break! How can the dipshit be humiliated when no one can see his face?

An armed robber is suing after police humiliated him having caught him trying to rob a bank.

Phillip Niere walked into Noris Bank in Aachen, west Germany, and threatened to kill five hostages if he did not receive the £200,000 he demanded.

However, he was rumbled when a cashier pushed the silent alarm button and shortly afterwards SAS-trained police surrounded the building.

The 38-year-old surrendered after an hour and he was frog-marched by a police officer down the street with his trousers around his ankles - and his jumper over his head. 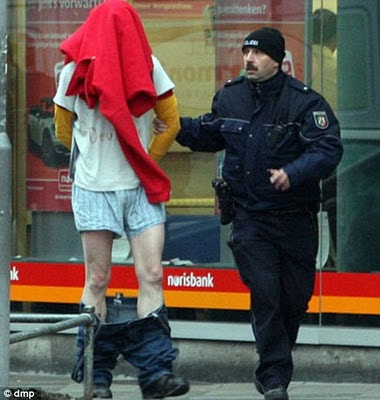 Niere, who is due in court tomorrow and is being held in a secure psychiatric facility, was told by negotiators that he would be treated with dignity.

But as this pictures hows he was granted anything buy a dignified arrest.

'The handcuffs are understandable, but what the police have to explain is why he was brought out with his jeans pulled down and his underwear on show,' a lawyer commented.

'It is clearly a breach of his human rights and caused Mr Niere needless humiliation and embarrassment.'

Only last week a Brit received a pay out of £13,000 after he was humiliated by his boss, who, furious that one of his staff had stolen hundreds of pounds from his business, hung a sign saying ‘thief’ around the man’s neck and frog-marched him to a police station. 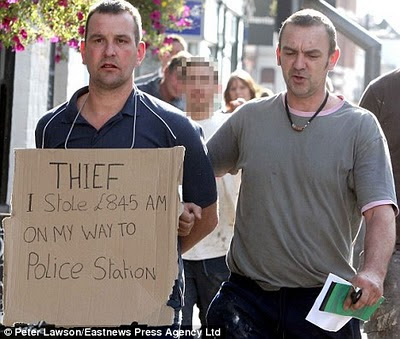 But while the employee, Mark Gilbert, was let off with a police caution, Mr Cremer spent three months facing a charge of false imprisonment until the case was dropped.

Now, in a further blow, the businessman has paid his former employee £5,000 compensation and covered his £6,000 legal fees in an out-of-court settlement to avoid a hugely expensive civil case for the ‘humiliation’ he suffered.
Posted by BarkGrowlBite at 3:19 PM