It's time to start shooting the hoodlums when they attack a police station and when they set buildings ablaze ... and not with rubber bullets! 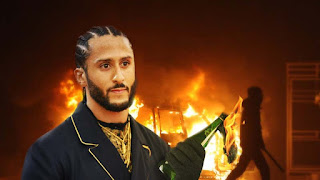 On Thursday, disgraced former NFL quarterback Colin Kaepernick tweeted that it's time for a revolution because of George Floyd's death by the knee of a white cop.  Well, that night he got his wish.  The Twin Cities of Minneapolis and St. Paul experienced the kind of revolution Kaepernick called for.

In Minneapolis hoodlums looted and set buildings ablaze.  They stormed the Third Precinct police headquarters and set it on fire.  Race baiting ("He'd be alive today if he were white.")  Mayor Jacob Frey ordered the police to evacuate the building and cops on the roof had to be rescued by helicopters.

Across the Mississippi River in St. Paul, hoodlums looted businesses and torched buildings.  According to the police, about 170 buildings had been damaged by night’s end.

Kaepernick's revolution cannot be allowed to continue.  The time to plead with 'the community' for peace has ended.  Kaepernick himself said: "The cries for peace will rain down, and when they do, they will land on deaf ears.  The time for action is past due."

Kaepernick is right, the time for action is past due, not only in the Twin Cities, but anywhere else  where this kind of rioting takes place.  No more pussyfooting around!  It's time to start shooting Kaepernick's hoodlums when they attack a police station and when they set buildings ablaze ... and not with rubber bullets!

Tear gas and rubber bullets obviously do not do the job.  Real bullets will!  I'm not advocating shooting peaceful protesters.  But the hoodlums who torch buildings and storm a police station are not peaceful protesters.  They are destroying property and endangering innocent people's lives.

Kaepernick calls the arsonists and looters "freedom fighters" and said he will pay their legal expenses.  "In fighting for liberation there’s always retaliation," Kaepernick said Friday morning .  "We must protect our Freedom Fighters. We started a legal defense initiative to give legal representation to Freedom Fighters in Minneapolis paid for by [Know Your Rights Camp]."

Finally, there ought to be some way to arrest and charge Colin Kaepernic with a crime.  It looks like he clearly incited his 'Freedom Fighters' to loot stores, torch businesses and clash with the police..  And he got his wish.

UPDATE: More of the same for the Twin Cities and more than 30 other cities Friday night, including in Dallas and Houston.  In Oakland, California, Kaepernick’s freedom fighters shot two Federal Protective Services officers stationed at the downtown Federal Building.  One of the cops died.  And in Brooklyn, a woman freedom fighter tossed a Molotov cocktail at a cop car with four officers inside.

Right here in Houston, freedom fighters threw rocks and bottles at cops and damaged 16 police cars. Four Houston cops had to be hospitalized. One freedom fighter blasted a group of cops with a fire extinguisher.

Maybe they can figure out some way to charge the disloyal shit with enciting to riot, or maybe sedition.